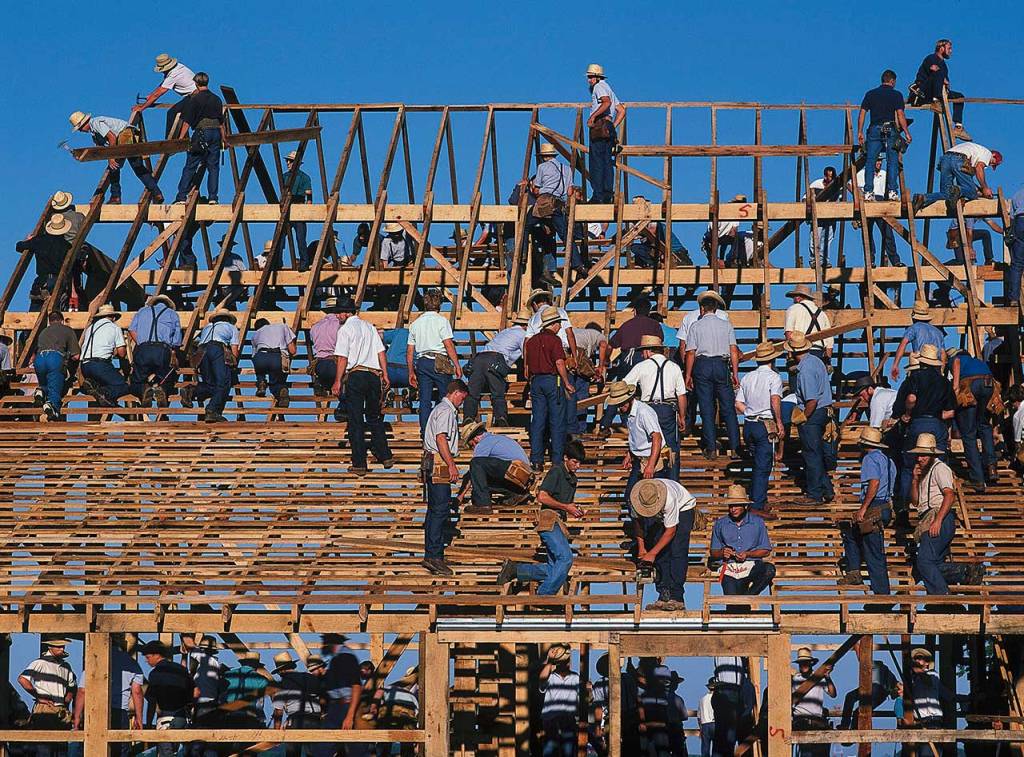 A barn raising, also historically called a “raising bee” or “rearing” in the U.K., describes a collective action of a community, in which a barn for one of the members is built or rebuilt collectively by members of the community. Yet a barn is also a large and costly structure, the assembly of which required more labor than a typical family could provide. Barn raising addressed the need by enlisting members of the community, unpaid, to assist in the building of their neighbors’ barns. Because each member was entitled to recruit others for help, the favor would eventually return to each participant. The tradition of “barn raising” continues, more or less unchanged, in some Amish and Old Order Mennonite communities, particularly in Ohio, Indiana, Pennsylvania, and some rural parts of Canada.

[Video by Scott Miller. He shot 1600 pictures from 7:00am until 5:00pm and compressed the 10 hours into 3 minutes and 30 seconds. The music in this video it’s a song called Cruisin’, by Scott Vestal, off of the compilation album, Bluegrass ’95].

The Amish are a group of traditionalist Christian church fellowships, closely related to but distinct from Mennonite churches, with whom they share Swiss Anabaptist origins. The Amish are known for simple living, plain dress and reluctance to adopt many conveniences of modern technology. The history of the Amish church began with a schism in Switzerland within a group of Swiss and Alsatian Anabaptists in 1693 led by Jakob Ammann. Those who followed Ammann became known as Amish [Source: Wikipedia].